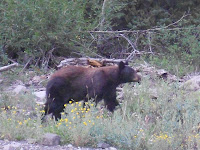 Little Bear was trapped and caught this week. I am so very sad about that. Little Bear was the smaller Bear that I have the picture of. He was yearling ( a year or so old). He did not really know how to be a bear.

He made a visit to my deck one night as I was preparing for bed. I heard him in the recycling. I ran to the back door (again in my night gown), screamed bloody murder for Jon who was already in bed. It scared Little Bear and he looked up and we were staring at each other through the glass in the door. I ran to get the air horn and set it off in the house because Little Bear was too close to the door to open it. Jon came running ( I am glad to add in his underwear, did I mention he was in bed) yelling, "What on earth are you doing?"


Then he saw Little Bear and knew the answer. Marble's young bear turned around and scampered down the deck stairs. Needless to say the recycling is no longer on the deck. But it was the last time that I saw Little Bear. Someone called him in to the Dept. of Wildlife. They trapped him. :-( Some say that they will tag him and when he gets the third tag he will be killed. Others say he will be killed right away. I do not know for sure what his fate will be. We here in this small mountain village live in his territory not the other way around. I hope things go well for you Little Bear. You were only being a bear!
Posted by Peggoty Stovall at 5:11 PM